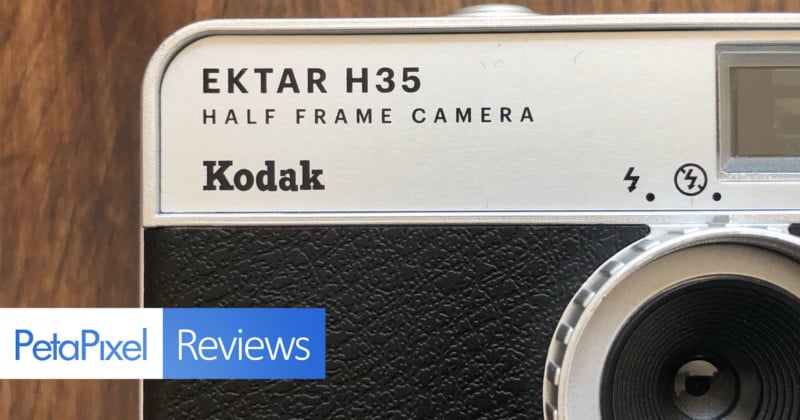 Despite rising film costs, Kodak hopes to keep film shooters snapping by offering a way to shoot film on a shoestring budget. Taking a cue from a 1960’s trend in camera design, Kodak has released the Ektar H35 half-frame camera.

The new Kodak Ektar H35 is a point-and-shoot half-frame 35mm camera that will yield an economical 72 photos per single roll of 36 exposure 35mm film.

Half-frame is an interesting format. Instead of the conventional 36x24mm image of 35mm film, half-frame literally cuts this in half to 17x24mm. 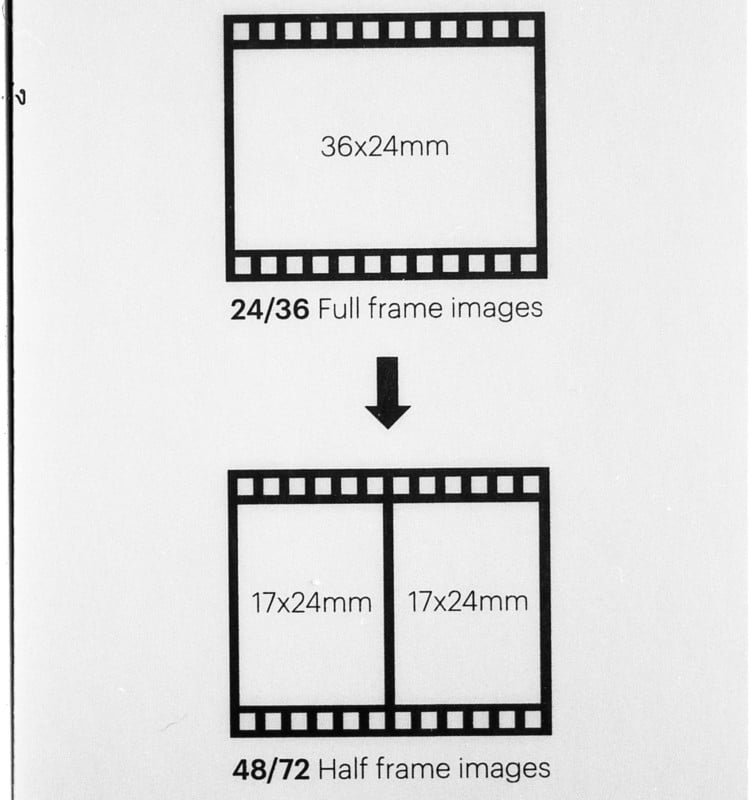 The lower resolution and “portrait” orientation make half frame a fun format for photos of people, similar to Fuji Instax Mini film, but of course, you’re free to photograph anything you like.

I pre-ordered my Kodak Ektar H35 on May 25 for just under $60 after shipping, and it arrived on my doorstep on June 30. Not bad.

The Ektar H35 has a faux chrome and black plastic body with your choice of brown, sand, sage, or black faux leather trim. I went with classic black.

The company states on its website that, “the pocket-size camera is light and tiny, and hence convenient for you to bring along daily.”

Well, it’s no iPhone, but the H35 is probably about as small as the film and mechanism can allow. It’s about the same size as two of those early, baby iPhones stacked atop one another and significantly shorter than even a current iPhone Mini. Heck, it’s even lighter than one iPhone Mini. 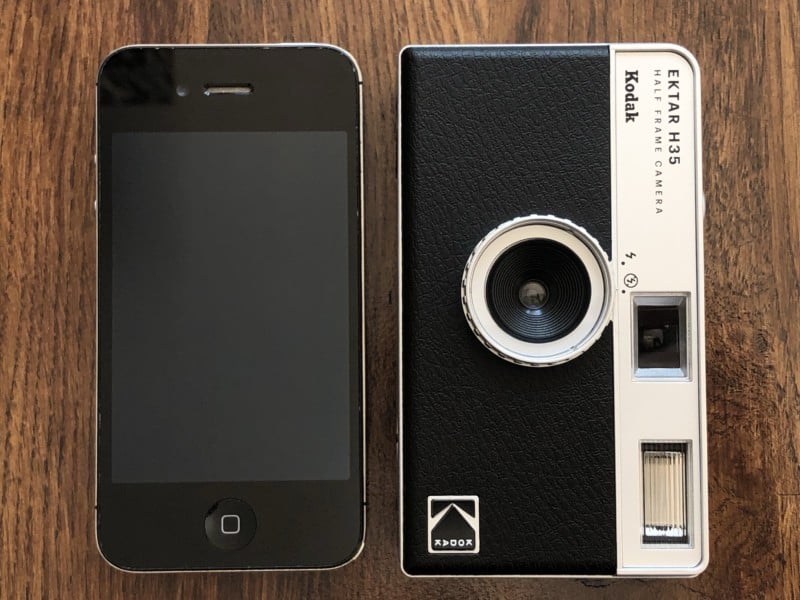 The Ektar H35 of course owes its light weight to its entirely ABS plastic construction. Save for the rather stylish aluminum face and nameplate, this camera is unabashedly toy grade.

The camera ships with a black wrist strap and drawstring bag, both of which are Kodak branded. It did not come with the single AAA battery that is needed to power the built-in flash, however, since the H35 is fully mechanical, it will work just fine as a natural light shooter without a battery installed, which is how I used it.

Inside the signature Kodak gold and black box, I also found a little card with a QR code printed on it. Like so many things today, the operating instructions can be found only online, but they are hardly necessary; the H35 doesn’t ask much of its user.

Controls on the Ektar H35 are the bare essentials: a film advance thumbwheel, shutter release, flash toggle switch, film rewind button, film rewind crank, and a film door latch. There is also a frame counter in case you lose track of where you’re at on a roll of film that, since it doubles the exposures you get per roll, seems to last forever. 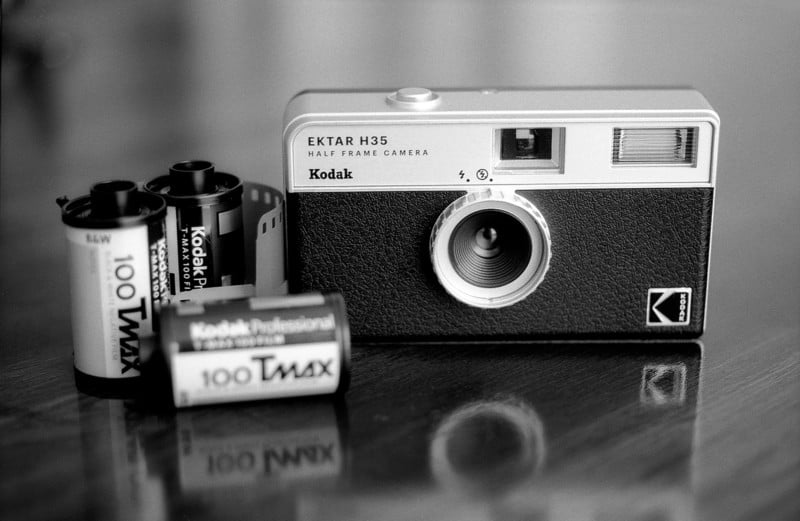 Despite being about the cheapest mechanical device one could manufacture, the few controls feel reasonably sturdy, particularly the flash switch which is located around the lens and delivers a positive little click with each move. Admittedly though, I was alarmed by how loose and wobbly the bottom-mounted rewind crank is.

Because I’m a black and white shooter, I decided to drop a roll of Kodak TMAX 100 into my new Ektar H35. On its packaging, Kodak boasts TMAX 100 as having the “finest grain” and grain is an important consideration when shooting half-frame film if you’re not into impressionism. 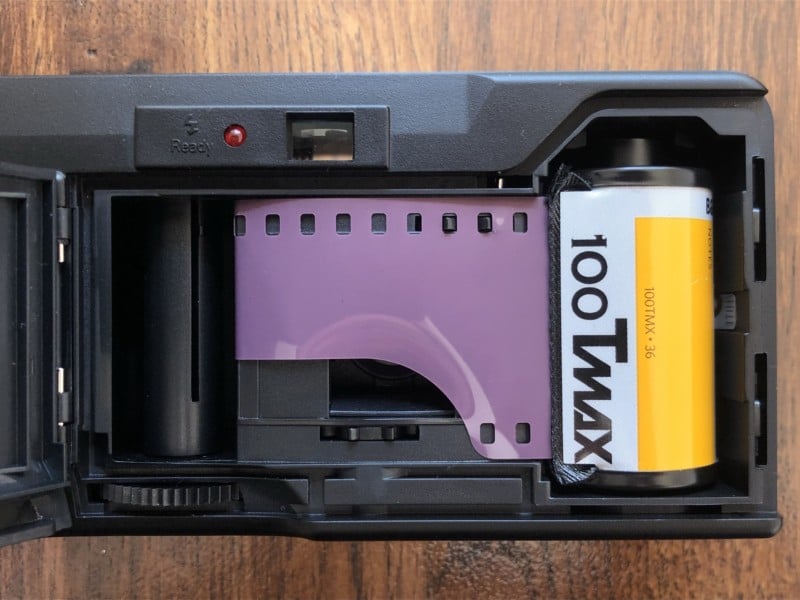 I do fully intend to try a roll of TMAX P3200 for insane grain but for now, 100 ISO is a good baseline for the H35, since the shutter speed is 1/100. I would argue that the simple optics of this camera are also better suited for black and white film than color, but that, of course, is a creative decision.

Most point-and-shoot cameras such as the iconic Kodak Instamatic line capture light via a single-element glass meniscus lens. I see in its tech specs, however, that the Ektar H35 employs a much more sophisticated two-element 22mm acrylic lens. Fancy, fancy! And yes, most half-frame cameras feature 20-30mm lenses which yield a “normal” field of view for this format.

The H35 lens is acceptably sharp, particularly at closer distances. Check out the detail in the closer hay bale vs the wide version of the same scene in the photo below, for example.

Since the lens is a fixed f/9.5, the strongest performance will come from putting a subject in that four or five-foot range, against a background that’s very far away. This will overcome the long depth of field and get a little soft-focus effect to provide some separation and “pop.” 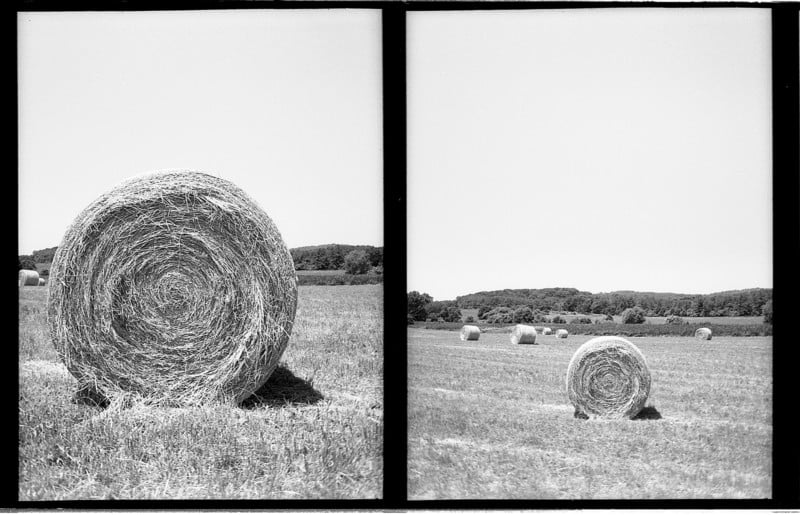 Like many early 20th-century lenses, despite being deeply recessed, I found that the H35 lens is a bit flare-prone and can make highlights glow. The shot of the sunset through the tree below is an exaggeration, of course, but you can see the reflection of the two lens elements in the flare; a little proof that this is a slightly better-than-normal lens for a point-and-shoot despite being made of plastic. 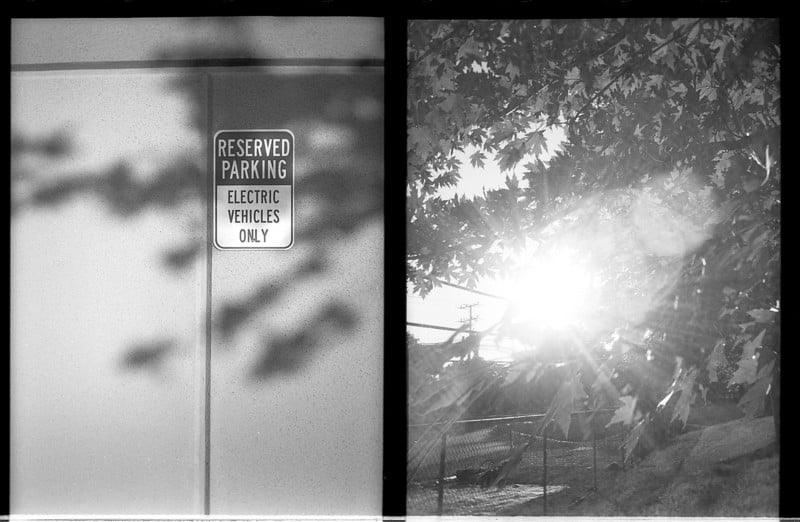 The half-frame format is fun to scan or edit in a diptych 35mm format. While shooting, I tried to shoot two images beside one another that made some visual sense or told a story. For the vintage Studebaker images below, I made a triptych in order to overcome the low resolution of the camera and have some fun with perspective. With two images, it’s less noticeable but in juxtaposing three shots, the terribly uneven frame spacing of an imprecise toy camera becomes obvious. Here too, you can see glow in the highlights of the harsh sunlight.

Also, on the Studebaker shots, some barrel distortion is evidenced by the direction that the vertical bumper guards point. At closer distances, the H35 lens does this and it isn’t altogether unpleasing, but if your subject is a person, you might take a step back; I like it on cars, though. I was very happy with the contrast and exposure in this mid-day tree-shaded area where the old Dodge van was parked. 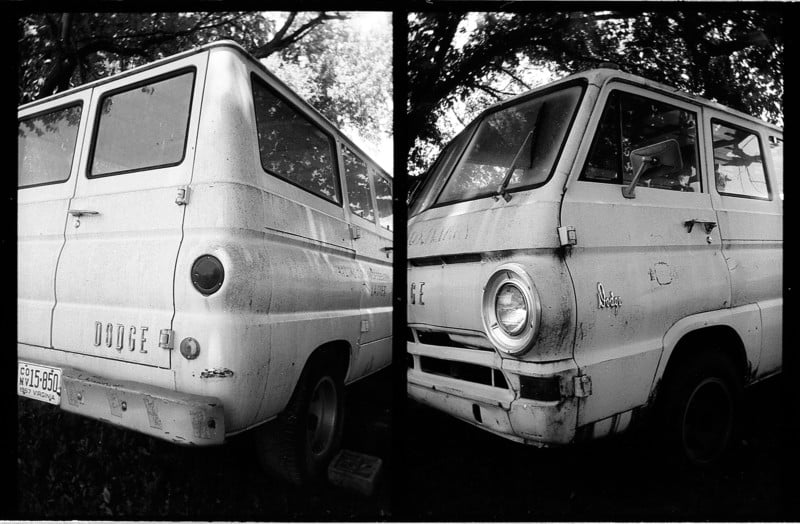 In addition to the fixed f/9.6 aperture, the shutter speed is also fixed to the aforementioned 1/100 second. Therefore, accurate exposure relies purely on your choice of ISO. Don’t forget, print films like Kodak Tri-X, TMAX, Gold, Portra, and Ektar have many stops of latitude that can produce a usable image from very inaccurate exposures.

If you do find yourself without enough light, or you want to compensate for backlit subjects, you can always switch on the H35’s built-in flash, but don’t forget to release the shutter until after the red indicator lamp is bright on the back of the camera — it takes a moment to fade up to full power. Based on my experience, full power means very little so you probably will want to eke out as much added light as you can. 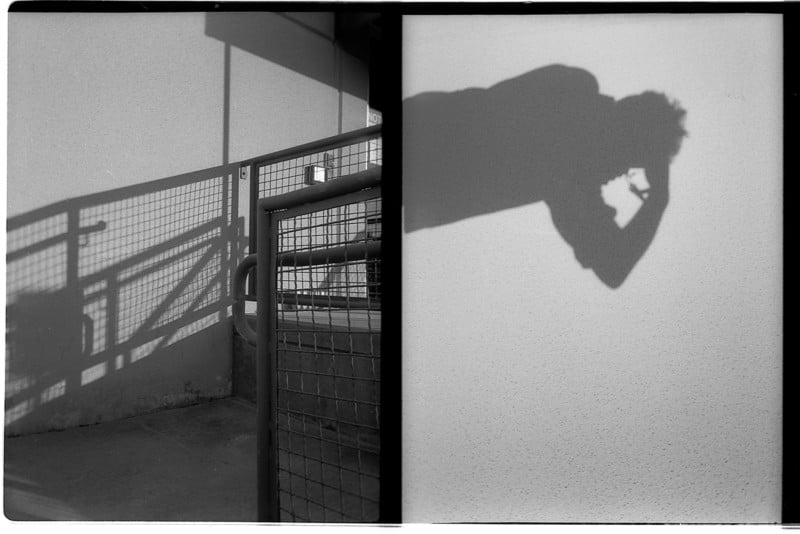 I shot without the flash and mostly in portrait orientation (holding the camera horizontally) for my first roll of 72 shots with the Ektar H35, but it was fun to switch up how I held the camera sometimes too, as I did in the shadow selfie above.

Speaking of image orientation, about the only thing that I really don’t like about this camera is the viewfinder.

If Retopro is the same company behind the Reto Project, it typically makes full-frame 35mm cameras. Based on what I can tell, rather than design a new, proper half-frame viewfinder for the H35, all the company did was fit the camera with an off-the-shelf full-frame finder and insert a really ugly and distracting mesh mask to either side of the full-frame window.

I guess that I got used to this arrangement and of course, exact framing isn’t important with a view camera. But the viewfinder is a critical feature of any camera, accurate and well-crafted or not. It’s where the eye of the photographer and the perspective of the camera come together. 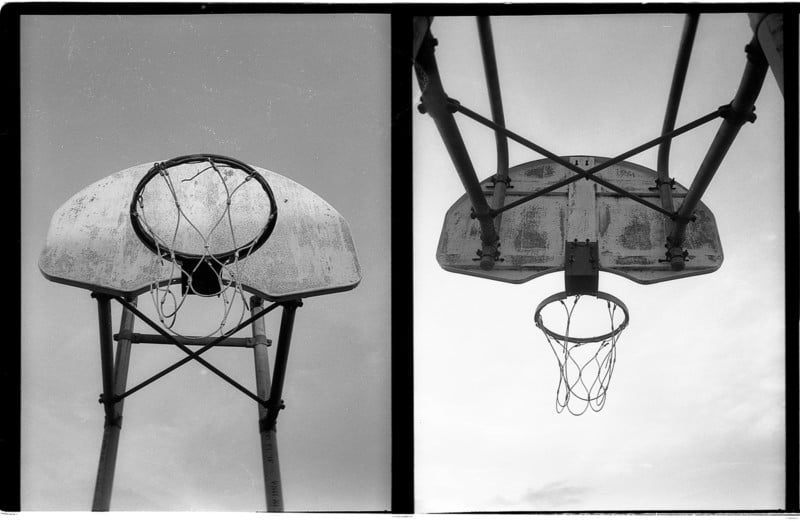 This important relationship just feels neglected and negated with the H35’s viewfinder. I can forgive a wobbly rewind crank and find the erratic frame spacing somewhat endearing, but the viewfinder is something that I don’t think should have been compromised. Is it a deal-breaker? Not for the low-priced fun that the Ektar H35 offers, but it does drive me mad to see a camera that is so close to a perfect slam dunk instead bounce off the rim.

As I was looking over my first roll of film, it occurred to me that we expect our more sophisticated cameras to produce consistent and compelling results in any type of lighting with any type of subject. We use their more complicated adjustments to make this possible, but with a simple camera like the Kodak Ektar H35, you must understand what scenes will work best for the camera, lens, and film, and cater to them rather than impose the scene on the gear and our own faculties.

This reversal of roles, finding scenes to fit the camera rather than making the camera fit the scene, might be a refreshing change of pace for veteran photographers and may provide a unique perspective to newer photographers. And the half-frame format does this too, also by causing a different approach to content. 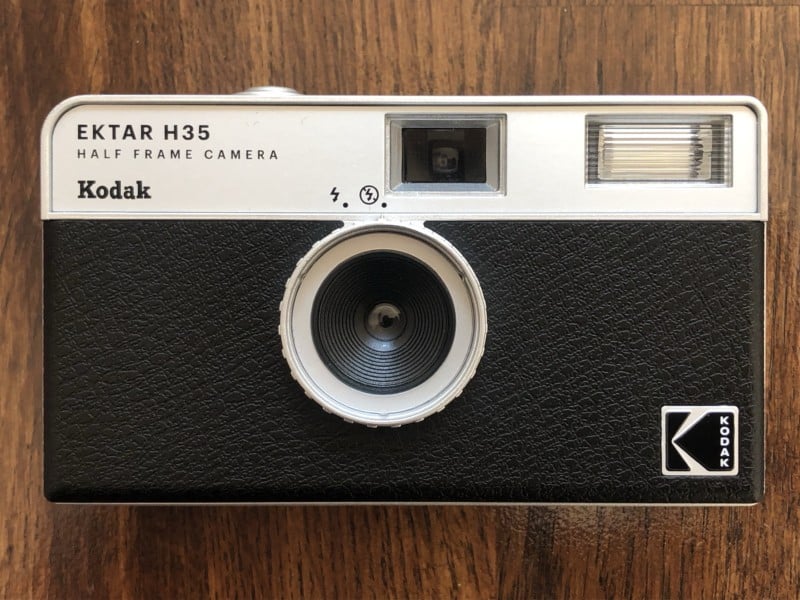 The Kodak Ektar H35 is easy, out-of-the-box fun. It eliminates the need to roll the dice on eBay auctions for a sought-after classic, only to mail it away for several months to a guy working through a backlog of projects in his retirement and pay hundreds of dollars in shipping and service when all is said and done.

Instead, you can just buy the H35 for $50 and immediately shoot with it, allowing you to spend your money on film and experiences rather than a costly camera. No matter how classic, cool, or plastic fantastic your choice is, half-frame film can be a great way to stir creativity and save money compared to full frame 35. And, I think, that is precisely what many of us are looking for lately.

If you insist on a glass and metal camera with some manual controls, go ahead and pick up a vintage half-frame camera on everyone’s favorite auction site. From the coveted, fully adjustable, interchangeable lens Olympus Pen F to the scale focus Canon Demi and Agfa Parat or even weirdos like the wind-up, rotary telephone-like Bell & Howell Dial 35, there are many half frame cameras to explore if you’re willing to go to some trouble.

You’ll want to support a repair shop by getting any vintage camera serviced so as not to waste film and money on a broken or soon-to-break oldie, but don’t whine that Kodak doesn’t offer a new half-frame camera of the quirky caliber of these classics. The cost to build such a precision optical, mechanical device today could hardly be profitable.

Should You Buy It?

Yes. Outside of a lackluster viewfinder, the Kodak Ektar H35 offers a quick, fun experience right out of the box.

About the author: Johnny Martyr is an East Coast film photographer. The opinions expressed in this article are solely those of the author. After an adventurous 20 year photographic journey, he now shoots exclusively on B&W 35mm film that he painstakingly hand-processes and digitizes. Choosing to work with only a select few clients per annum, Martyr’s uncommonly personalized process ensures unsurpassed quality as well as stylish, natural & timeless imagery that will endure for decades. You can find more of his work on his website, Flickr, Facebook, and Instagram.