Home Film Why this Fujifilm classic is the best cheap mirrorless 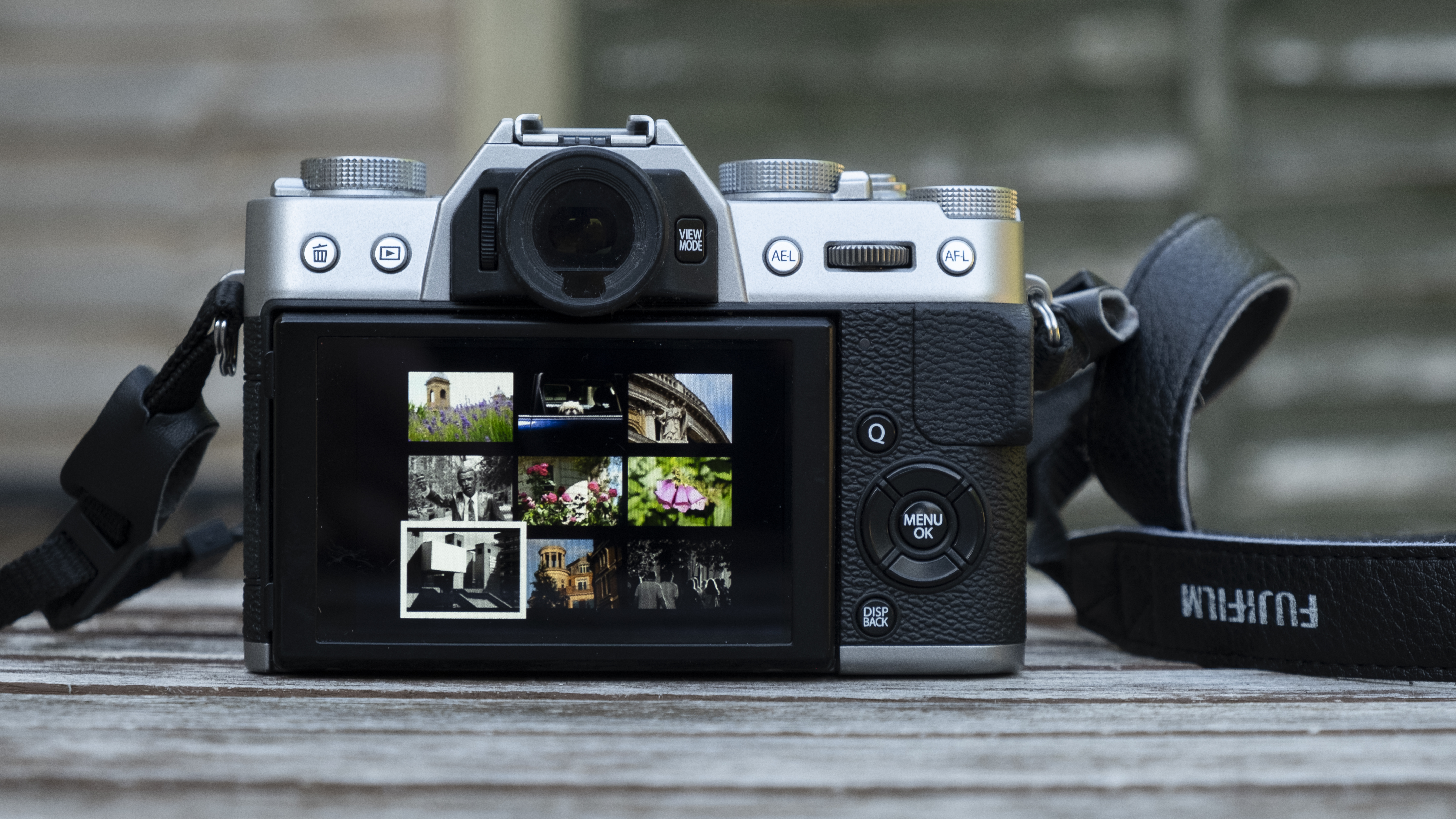 Here’s something the camera manufacturers aren’t too eager to tell you: there’s never been a better time to buy a second-hand mirrorless camera.

I learned this, accidentally, after a recent experiment. Rather than lug around my main camera and a weighty bag of lenses on a photo walk, I grabbed my five-year-old Fujifilm X-T20 instead. After giving it a cold, refreshing firmware update, we popped out for a relaxing day of garden squares and dog portraits.

The experience was pretty revelatory. My original aim had been simplicity – tired of tripods and faffing with ND filters, I fancied a return to the simple pleasure of taking handheld photos with a small camera and a couple of lenses.

But my day with the X-T20 also reminded me of a few important things. Firstly, most people (including me) buy more camera than they really need. Secondly, some five-year-old mirrorless cameras are still really, really good. And thirdly, smartphones are the most joyless cameras ever made.

Perhaps that’s a little harsh. But compared to a prodding a slippery rectangle, my day with the X-T20 felt like the photographic equivalent of tearing around country lanes in a Porsche Boxster. It also sent me down something of a wormhole – how much can you buy an X-T20 for these days? And is it now the best cheap mirrorless camera you can buy?

The answers, I discovered, are respectively ‘well under half what I paid for it’ and, in my opinion, ‘yes’. There are certainly plenty of even more affordable cameras, which you can find in our guide to the best cheap cameras. But in terms of bang-for-buck, the Fujifilm X-T20 is tough to beat – and the reason is because it’s the point at which mirrorless cameras started to hit diminishing returns. Well, for stills photography at least…

Mirrorless cameras have evolved a lot in the five years since the Fujifilm X-T20 arrived. But most of these advances have been related to usability and video. If you’re a beginner who’s looking for a little companion to improve your photography skills, and you aren’t too fussed about video, then the X-T20 is very much a modern sweet spot. Particularly at today’s second-hand prices of around $450 / £350 / AU$600.

It isn’t the only great mirrorless camera in that price ballpark. Olympus and Panasonic – which launched the DMC-G1, the first proper mirrorless camera, in 2008 – also released some fine options during that golden era for hobbyist cameras from 2015-2018. If you’re looking for second-hand bargains, you should definitely also consider the similarly-priced Olympus OM-D E-M5 Mark II, E-M10 Mark III and Panasonic Lumix GX80/GX85. All three can be found for around $350 / £300 second-hand.

But after my day out with the Fujifilm X-T20, I jotted down eight reasons why I think it’s the best value second-hand mirrorless camera for beginners. The first is its design. The original idea behind mirrorless cameras was that they could be smaller, lighter and simpler alternatives to DSLRs for everyday shooting. The X-T20 absolutely nails this concept.

Sure, it’s still twice the weight of an iPhone 13 Pro, but its metallic construction, viewfinder and controls make it an infinitely more enjoyable photography companion. Which brings me onto my second reason: its dials.

More than just a nostalgic nod to film cameras, these are still a brilliant way for beginners to learn the exposure triangle – and the fact that most Fujifilm lenses come with an aperture ring means you get a fun, tactile shooting experience on a very small body.

Thirdly, there’s the X-T20’s sensor. I originally chose the camera over its Micro Four Thirds rivals because its APS-C sensor is twice the size of those as the alternatives from Olympus and Panasonic. This means it’s good in low light for such a small camera, but also pretty forgiving if you make mistakes.

For example, when I ran into this apparently A-list dog in its chauffeur-driven car, I’d stupidly left the camera set to a high shutter speed, which pushed the ISO up to 3200. No matter; the X-T20’s X-Trans CMOS III sensor, the same as the one in the pricier Fujifilm X-Pro2 and X-T2, is fine at higher sensitivities like this and its files respond well to a little noise reduction.

This sensor was renowned for its ability to produce great JPEGs with lovely colors, and that still stands today. It has an ability to extract drama and atmosphere from scenes, without going overboard in the way that smartphones tend to do. If anything, its metering has a tendency to occasionally underexpose shots, which is fine because you can always pull that detail back later if needed.

If you do fancy going for something a bit more dramatic and social media-friendly, then there’s my fourth reason for picking the X-T20 over the alternatives: Fujifilm’s Film Simulations.

These proprietary ‘recipes’ emulate the look of the company’s old film stocks and are a great way to quickly inject some character into your shots. It may lack the latest ones like Eterna, but the X-T20 does have nine of them and playing around with likes ‘Monochrome’ is always a joy in high-contrast scenes.

It may be retro, but the X-T20 does have a tilting touchscreen; my fifth reason for picking it over older mirrorless cameras. That might not sound much, but it was Fuji’s first camera with a touchscreen and I still prefer this screen design over the more modern, video-friendly displays that flip out to the side.

This touchscreen doesn’t work with the camera’s menus and it feels about as responsive as your smartphone it’s had a few whiskies, but you can customize it so that only one half of the screen responds to touch – handy if you want to move the AF point around with your eye up to the viewfinder. The tilt mechanism is also a real bonus over your phone when it comes to shooting from awkward angles.

That tweakable touchscreen neatly leads into my next two reasons: the X-T20’s customizability and versatility. You can change the function of pretty much every button and dial on the camera – and for such a small camera, there are a lot of them. Fingers confused by the lack of an ISO dial? You can just map it to the function button on the top.

Unlike larger cameras, you can also adapt the size of the X-T20 to suit the kind of shoot you’re doing. If you hand yearns for a bit more camera to hold onto, you can always add a third-party grip – then remove it to turn it into a smaller, more travel-friendly companion. That’s something you just can’t do with a bigger mirrorless camera or DSLR.

Why not just buy a premium APS-C compact camera instead? Because the X-T20 benefits from the final, and perhaps most important, of the eight benefits I noted down; a great range of lenses. One of the main reasons photographers have been drawn to the X-series are these lenses, which are both high-quality and smaller than full-frame equivalents.

But if you’re buying a relatively cheap mirrorless camera, there’s little point in splashing hundreds or thousands on lenses. Fortunately, there’s two bits of good news on that front.

Firstly, Fujifilm makes cheap versions of some of its own lenses that used the same optical construction as pricier ones, but simply have a plastic build. For example, the XC 35mm f/2 costs only $199 / £169 / AU$299 new and would make a great companion for a used X-T20.

Also, in the past year or so, Fujifilm has finally opened up the X-mount to third-party lens makers. This means Sigma, Viltrox and Tamron have all made some good-value lenses for cameras including the X-T20, with the promise of more en route.

And if you want to dabble with some really affordable glass, there’s always the dirt-cheap manual lenses from the likes of 7Artisans that work nicely with this camera thanks to its handy ‘focus peaking’, which colors the parts of your image that are in focus.

So is the Fujifilm X-T20 is the perfect camera, then? Far from it, and my list of niggles is almost as long as the good stuff.

It isn’t weather-sealed, the battery only lasts for a few hundred shots, its tripod thread is bafflingly positioned right next to the battery door, there’s no autofocus joystick, the viewfinder is small, its 4K video quality trails its rivals, and Fujifilm’s companion app is still pretty dated.

Still, even five years on, I didn’t find any of these to be deal-breakers or major handbrakes on the shooting experience. Perhaps even more interestingly, I also didn’t find the X-T20’s comparatively ancient processor or autofocus to be a huge barrier either.

The two biggest photographic advances on mirrorless cameras in recent years are burst shooting speeds and subject-tracking autofocus. The new Fujifilm X-H2S, for example, can shoot at a ludicrous 40fps with full AF-tracking, and can automatically spot animals, birds, cars, bikes, planes and trains in your scene in order to track them with Terminator-like precision.

While these are nice-to-haves, they absolutely aren’t essential for taking photos of moving subjects. The X-T20 may not support newer UHS-II SD cards, but it can still fire off shots at 8fps for a few seconds, even when you’re shooting in raw. It’s certainly no pro sports camera, but I was pleasantly surprised at its performance when attempting to snap an excitable French Bulldog.

There were definitely more AF misses that I’ve experienced with more recent cameras and its buffer does clog up pretty quickly. But for the odd shot of a rapidly-moving pet or child, it’s more than up to the task – and with the right lenses, will produce far better results than your smartphone.

The lesson from my day of shooting with the Fujifilm X-T20, then, is that while modern comforts like Animal Eye AF are impressive and useful, they’re far from essential for most hobbyist photographers. And that goes for quite a few of the quality-of-life camera upgrades we’ve seen in the past few years.

It’s a very different story when it comes to video. If you’re a ‘hybrid’ shooter who shoots a mixture of still and moving images – as most professionals now are – then you’re likely to become quickly frustrated by cameras like the X-T20. This is where the likes of the Sony A7 IV, Panasonic Lumix GH6 and new Canon EOS R7 really come into their own.

But if you’re looking for a stills camera that strangers and pets warm to, rather than recoil from, then few can match the value provided by the X-T20. Not sure how to track one down? Our guides on how to buy a second-hand camera and how to get a great DSLR or mirrorless camera for under $500 will steer you in the right direction.

They may not offer the slick, AI-powered experiences offered by today’s best mirrorless cameras or phones, but the X-T20 and its brethren are hard to top for value and the fun factor.